Recessions and recoveries: a historical perspective 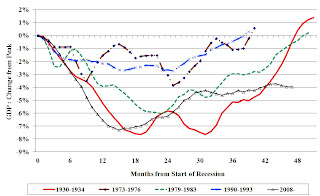 [Note: this is now slightly out of date. An updated version is here.]

Following the GDP numbers published January 25, here is a further updated version of NIESR's chart showing the path of recession and recovery in various previous downturns.  The chart shows that this "depression" - defined, admittedly somewhat arbitrarily, as the time period during which output remains below its previous peak, shown as the X-axis above - is now longer than that experienced during the Great Depression, and is not likely to end any time soon. It also shows how what was initially a reasonably strong, albeit patchy, recovery stalled in the autumn of 2010; since then there has been very little growth .

Posted by Jonathan Portes at 18:00